Okay, follow us here — this has several layers. Stacy Hinojosa is a well-known YouTube personality who has created a popular series of fantasy Minecraft videos called “Dogcraft”, under the name Stacy Plays. Well now, under that same name, she has spun off one of those Minecraft stories into a new fantasy book series, Wild Rescuers, written under the same name. The first book in the series, Guardians of the Taiga, goes like this: “Stacy was raised by wolves. She’s never needed humans to survive and, from what she sees of humans, they’re dangerous and unpredictable. For as long as she can remember, Stacy’s pack of six powerful, playful wolves — Addison, Basil, Everest, Noah, Tucker and Wink — have been her only family.  Together, Stacy’s pack patrols the forest to keep other animals safe, relying on her wits and each wolf’s unique abilities to accomplish risky rescue missions. But as the forest changes and new dangers begin lurking, are Stacy and the wolves prepared for the perils that await them?” The book is available in hardcover now. Harper Collins has more information, as well as an interview video with the author. 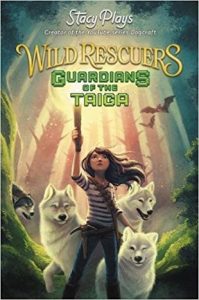