The march continues — in seemingly unexpected directions! This showed up in our news feed from The Hollywood Reporter: “Stitch is back. Lilo & Stitch, the 2002 animated movie from Walt Disney Feature Animation, is getting the live-action treatment, The Hollywood Reporter has learned. The studio has hired up-and-comer Mike Van Waes to pen the script for the remake, which will be produced by Dan Lin and Jonathan Eirich of Rideback, formerly known as Lin Pictures. The two are already known in the Disney halls as they are working on the high-profile live-action remake of Aladdin. The original film was written and directed by Dean DeBlois and Chris Sanders, who later found acclaim with How to Train Your Dragon. The Hawaii-centric story told of the bond formed between a lonely human girl named Lilo and a dog-like alien named Stitch, who is engineered to be a force of destruction. Pursuing aliens, social workers and the idea of the bond of a family figure into the proceedings. [In case you forgot the basic idea — ye ed-otter] It is unclear whether the new project, which is intended to be a live-action/CG hybrid, is intended for theatrical release or for Disney’s streaming service that is set to launch in 2019.” Guess we’ll find out soon enough. 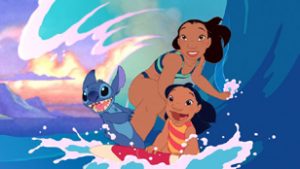