And yet more animation heading to MIPCOM, looking for distribution. From Animation World Network: “Ken Faier’s independent production company, Epic Story Media (ESM), has signed major co-production agreements for two new animated series, Dolph-N-Fince and Haley & The Hero Heart, which both make their international debut at MIPCOM.” So let’s talk about the furrier, or rather, finnier of the two… “Dolph-N-Fince is a co-production with Canadian independent Neptoon Studios, headed by award-winning Todd Kauffman and Mark Thornton (Looped, Grojband, Sidekick) and Paris-based Samka Animation (Jamie’s Got Tentacles, The Marsupilami, The Sisters). Aimed at children aged 5-12, Dolph-N-Fince is a ‘fish out of water’ comedy about dolphin brothers who leave the ocean forever to live on land as guardians of Ocean King’s rebellious teenage daughter. The boys’ over-the-top personalities lead to crazy misadventures that always put Coral in the danger zone. If they blow this, their freedom and dolphin souls are on the line.” Shouldn’t that be cetacean out of water…? 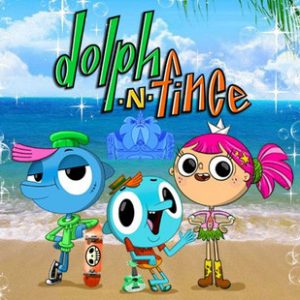