Little Fox went out with a Pig in tow…

Something that slipped by us last summer, but were happy to catch up with it now, thanks to Boom! Studios’ Kaboom! imprint: Ruinworld. “Writer/Artist Derek Laufman (Adventure Time Comics) brings his worldwide hit digital comics series to life at BOOM! Studios. Intrepid adventurers Pogo and Rex are on a quest for fame and fortune. Their discovery of a special map leads them on an epic journey through dangers, demons and old enemies. Just one problem-they’ve already lost the map.” Check out the preview and interviews over at Boom! 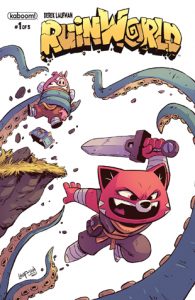