Another monstrous item we somehow missed, but now we found out about it thanks to Antarctic Press — and Bleeding Cool. “Cower at the presence of Gao, colossal kaiju of cuteness! This lovable leviathan spends his days under the sea until visiting aliens convince him to make friends on the surface. Gao thus leaves the ocean depths, only to spread shock and d’awww in his wake. This adorable mountain of menace unleashes destruction with every step…but how can you be mad at a face like that?” GAO! was written and illustrated by Alfred Perez for some time as a mini-comic, but now the folks at Antarctic have brought it to light as a new full-color comic miniseries. 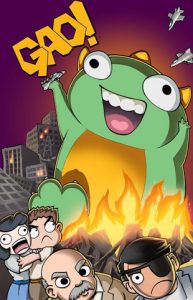