All The World Shall Be Your Enemy

How on Earth did we not hear about this coming up? Well thanks to The Nerdist we did — and just in time too, as the newly-animated Watership Down is due very soon! “The BBC and Netflix are releasing a new CG-animated version this Christmas, and in order to more accurately portray the book, it’s going to come in two feature-length installments. The cast was already all-star, with James McAvoy as refugee rabbit leader Hazel, Nicholas Hoult as the psychic runt Fiver, John Boyega as the intimidating fighter Bigwig, Olivia Colman as bereaved doe Strawberry (a gender-flip from the book), Ben Kingsley as villain General Woundwort, Tom Wilkinson as doomed elder Threarah, and Taron Egerton as the rabbit Christ-analogue El-ahrairah (meaning “prince with a thousand enemies”). But now, via an official BBC announcement, they’ve revealed even more: Peter Capaldi will play the bunnies’ seagull ally Kehaar, Daniel Kaluuya is warren destruction survivor Bluebell, and Rosamund Pike is the Black Rabbit of Inle, a death/Satan figure and counterpart to the rabbit deity Frith.” All that plus director Noam Murro, the man behind 300: Rise of an Empire. Look for it on Netflix this coming December. 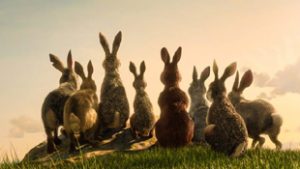