Trapped in a World He Never Evolved For

Richard Fairgray is a well-known comic book artist and children’s book illustrator in his native New Zealand. (Interesting fact from his Wikipedia: Richard illustrates and animates his own works, even though he is legally blind.) His best-known work, Blastosaurus, created quite a sensation in his homeland. Now living in Southern California, Richard has re-launched his comic with the help of Paul Eiding and Golden Apple Books. From Previews: “Blastosaurus, a 6-foot-tall, mutant triceratops, aided by Tabitha Jones and Richard Green (the twelve-year-old sidekicks he never asked for) battles monsters, robots, sentient meatballs and whatever other weirdness Freak Out City can throw at him. This action/fantasy all-ages book is big, stupid fun, grounded by a real emotional core and the most human dinosaur you’ll ever meet!” And look, there’s a YouTube preview as well. Blastosaurus is out in comic shops now. 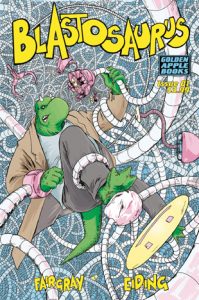