You may recall we told you about Patrick and Jessica Reilly, a pair of U.S. military veterans who work together as a creative team. Well here’s an update: After some successful fundraising through Patreon the first issue their black & white fantasy comic Five Realms has been released. “Join Mehan, Ronin Prince of the Mallow Clan, his best friend Gellaze, and his student Iwain as they uncover the mysteries surrounding a ‘Golden King’ buried deep within a dust-chocked canyon.” The 1st issue is available at their Etsy store and a 2nd is due this winter. 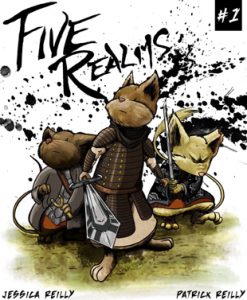