Why the Crow is Black

Almost exactly a year ago we told you about a VR film in production called Rainbow Crow, based a Native American legend. Well now it seems that project has changed name and changed format. According to Animation Magazine, Crow: The Legend will premiere as a free-to-view animated feature on Facebook and YouTube later this month. “Written and directed by Eric Darnell [Antz, Madagascar] with input from Native American cultural experts and community leaders, the folklore-inspired tale arrives timed to Native American Heritage Month. The film features an all-star voice cast including John Legend as Crow, Oprah Winfrey as The One Who Creates Everything by Thinking, Sarah Eagle Heart (Native Americans in Philanthropy CEO) as Luna; 83-year-old tribal elder and lifelong Native rights crusader Randy Edmonds as the Narrator; Liza Koshy (Hulu’s Freakish) as Owl; Diego Luna (Rogue One: A Star Wars Story) as Moth; Tye Sheridan (Ready Player One) as Turtle; and Constance Wu (Crazy Rich Asians, Fresh Off the Boat) as Skunk… Inspired by the classic Native American legend about the origins of the bird, Crow: The Legend respectfully illustrates the sacrifices the bird must make. As the most beautiful animal of the forest, Crow must risk everything to save those around him. With themes of diversity and self-sacrifice for the greater community, Crow demonstrates how one single act of sacrifice can have a profound impact to our world.” You can also check out the official trailer at Animation’s link. 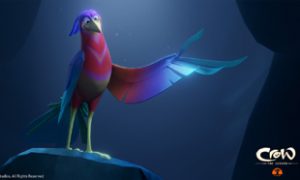