Aw, the Brits Get Everything!

This came out of nowhere, but we have an excuse: I appears to be a UK exclusive. Here’s what we got from Animation World Network: “Disney UK has announced that Paloma Faith, Miriam Margolyes, Ben Bailey Smith, Tameka Empson and Bethan Wright have signed up for a ‘spot’ on Disney Channel’s brand new animation series, 101 Dalmatian Street, and will be featured in the first season which is set to launch on Disney Channel UK early next year. Ahead of the season premiere, there will be a special episode, airing in December 2018, which will introduce audiences to the unique characters and world of 101 Dalmatian Street. The U.K. guest stars will be joining Josh Brener as Dylan (Silicon Valley, Star Wars Resistance, The Big Bang Theory), Michaela Dietz as Dolly (Steven Universe, Barney & Friends) who voice the eldest Dalmatian siblings… Aimed at girls and boys, the new series has been reimagined for the 21st Century and is set in modern day London in the borough of Camden. The series follows the adventures of eldest siblings Dylan and Dolly, their parents Doug and Delilah, and 97 younger puppies, whose names also begin with ‘D’, in an epic comedy about family life, multiplied one hundred and one.” The article has a whole bunch more about the voice actors and the production team. Who knows? Maybe Disney will let us folks in North America see this sometime. 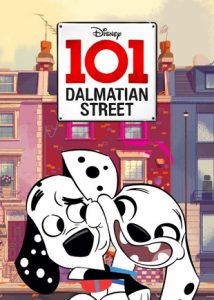