You might well remember the name of Mark Dindal: He directed the films Cats Don’t Dance, The Emperor’s New Groove, and Chicken Little.  All films with more than a passing Furry Fandom interest, yes? Well Mr. Dindal largely disappeared after that trio of films… that is, until now. Check out this news from Animation Scoop: “Alcon Entertainment’s new Garfield animated feature has selected its director. The all-CG cartoon feature will be directed by Mark Dindal, it was announced today by Alcon co-founders and co-CEOs Broderick Johnson and Andrew Kosove. Writing team Paul Kaplan (George Lopez) and Mark Torgove (Raising Hope) penned the script. Pre-production it set to begin next month in Los Angeles.” So there you have it. More about a release date when we know! 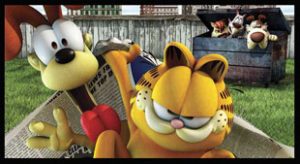