Nothing Spooky Here At All, Folks…

John Kerschbaum is a writer and illustrator we’re not familiar with, but evidently he’s quite well-known in the world of underground comics. Recently Fantagraphics published Petey & Pussy: Puppy Love, John’s second collection of black & white comic strips featuring the titular dog and cat… pets who have the heads of middle-aged men. Right… Here’s the official description: “John Kerschbaum’s Petey and Pussy, the stars of the cult classic 2008 book by the same name, return, and so does their unique brand of animal neuroses. Imagine a Secret Life of Pets where the animals hang out in dive bars. Petey is a compulsive dog that values his unchecked freedom and exemption from responsibility. Pussy is an irritable, self-absorbed cat, of course, with a gambling problem. They are joined by the obnoxious Bernie the bird, who has courted a new girlfriend (or is it just a mirror?) and their owner, a sexually frustrated geriatric who is more concerned with online shopping then her pets. Their darkly hilarious adventures include tracking down troublesome squirrels, barely taking care of a new litter of puppies, and avoiding the dreaded ‘snipsnip’ from the veterinarian.” Want to know more? Check out the review at The Comics Journal. 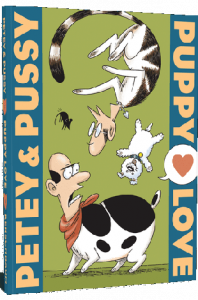