The Annie Nominations for 2018

Once again the International Animated Film Society (ASIFA) have released  their list of nominees for the 2018 Annie Awards — the Oscars of animation, to many folks. And once again, we’ve had a banner year for animation with Furry content — so there are lots of anthropomorphic movies, TV series, short films, and other goodies among the Annie nominees. By far the furriest film among the nominees for Best Animated Feature is Wes Anderson’s Isle of Dogs — which is also nominated for Character Animation, Production Design, and Voice Acting (Bryan Cranston as Chief). But nominees Early Man, Ralph Breaks The Internet, and even Spiderman — Into The Spiderverse (yes!) had their own Furry content — and each of them are nominated in several categories too. Among the nominees for Best Independent Feature is Tito & The Birds, while one of the nominees for Best Animated Special Production (limited release) is The Highway Rat. England is well-represented in the Best Character Animation in a Live Action Production category (whew!), with both Paddington 2 and Christopher Robin receiving nominations. In the Best Animated Short category check out Lost & Found by Wabi Sabi Studios, while the brand new Best Virtual Reality category includes Crow: The Legend by Baobab Studios and the game Moss by Polyarc. Over on the television side of things, the category of Best Commercial includes four nominees that are very Furry! The rest of the Television categories include a parade of familiar and new Furry titles, including The Adventures of Rocky and Bullwinkle, Bojack Horseman, DinoTrux, Disney’s Mickey Mouse, Hey Duggee, Hilda, Kung Fu Panda: The Paws of Destiny, Rise of the Teenage Mutant Ninja Turtles, and Tumble Leaf. Needless to say there are too many cool nominations to list them all here, so head on over to the Annie Awards page and check them out for yourself! The Awards will be presented on February 2nd at UCLA. 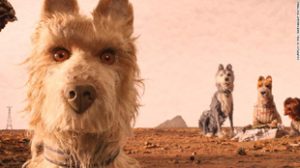