Found this thanks to Animation World Network: “Netflix has announced that it will produce the animated feature film, Escape From Hat, from two-time Academy Award-nominated director Mark Osborne (Kung Fu Panda, The Little Prince) together with writer Adam Kline (Artemis Fowl, The Clockwork War)… The screenplay is by Kline and Osborne, based on the book of the same name by Kline [illustrated by Brian Taylor — ye ed-otter], a new middle-grade novel that will be published by HarperCollins in Winter 2020… Escape From Hat brings light to the ancient mysteries of magic. In a fairy tale where black cats are bad and magic rabbits are good, balance is threatened when one such rabbit is cast into a mysterious realm of danger and shadow. There, our desperate hero rallies an unexpected band of allies and undertakes an impossible quest to escape from inside a magician’s hat – and return to the human boy he dearly loves.” Netflix say they plan to release the film in 2022. 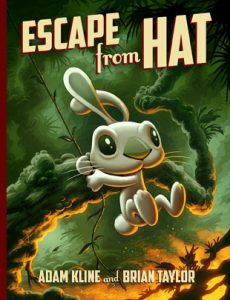