More from Animation Magazine. Turns out that a well-known animated app is now being turned into a full-fledged animated TV series. This is from Kidscreen: “9 Story Distribution International has picked up distribution rights to Dr. Panda and will start selling the new 3D-animated series in all global territories except China, Hong Kong, Macau, Taiwan and select MENA countries at MIPCOM… Aimed at kids ages three to six, Dr. Panda is the first 3D-animated series from the same-name kids app developer that has racked up more than 95 million downloads and five million active monthly users since rolling out its first app-connected toy and AR app in 2017. The show is created and co-produced by Malaysia’s Giggle Garage Animations (Origanimals, Kazoops) and Spider Eye Productions (Jungle Junction, Thomas & Friends) in the UK. It’s directed by Patrick Chin and written by Daan Velsink (Panic!, Snapshot, Bingo!) and Chris Parker (Peppa Pig, Shaun the Sheep). Its titular main character tries out new jobs and solves problems with his friends in each episode.” The producers hope to have the new show ready to roll out before the end of this year. 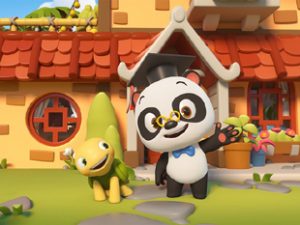