More from Animation Magazine and Kidscreen: “London-based distributor CAKE has picked up international rights to stop-motion series Kiri and Lou… Featuring paper and clay stop-motion animation from Antony Elworthy (Coraline, Corpse Bride), Kiri and Lou is written and directed by Harry Sinclair and co-produced by Fiona Copland from indie production company Stretchy, and Heather Walker at  Yowza! Animation (Curious George, Welcome to the Wayne). Aimed at three- to six-year-olds, the show focuses on the friendship of a feisty dinosaur and a gentle creature—who are joined by an unlikely group of animal friends.” It also features the voices of Jemaine Clement (Flight of the Conchords, Moana) and Olivia Tennet (Lord of the Rings: The Two Towers) as the lead characters. Visit the official web site to find out more. 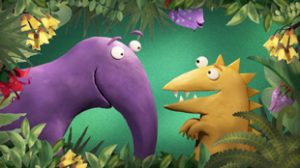