What Are YOU Doing This Weekend?

If you grew up between the 1960’s and the 1990’s, we know where you were on Saturday mornings: Seated right in front of the television, catching up with your favorite animated and fantasy TV series. Now four whole decades of weekend TV pleasures are chronicled in It’s Saturday Morning! A Look Back at Four Decades of Animation, Pop Culture, and Tradition (whew!). It’s a new hardcover book written by Joe Garner and Michael Ashley. “With concept art, archival images, all-new interviews, and a foreword by Bobby’s World creator and funnyman Howie Mandel, It’s Saturday Morning! celebrates the shows, characters, songs, and commercials that made Saturday mornings a pop culture event—decade by decade… Broadcasting into family living rooms from the 1960’s to the 1990’s, this wildly creative art form wrought a beloved rite of passage. From the hours of 8 a.m. to 12 p.m., parents could sleep in while their children plopped on the couch to consume cartoons galore. From The Bugs Bunny Show, The Jetsons, and Jonny Quest to The Smurfs, He-Man, and Animaniacs, this window of time promised pure entertainment and an experience that united generations… This entertaining walk down memory lane is made complete by a review of some of the iconic products advertised between these favorite cartoons. ‘After These Messages…’ segments provide fascinating facts about the merchandise that appeared in Saturday morning commercials, such as the Slinky, Lite-Brite, Cabbage Patch Kids, and Golden Crisp cereal.” Yum! Needless to say there are lots of furry-themed shows discussed in these pages. It’s Saturday Morning! is available now from Becker & Meyer. 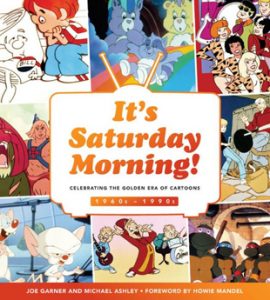