Lion Forge Comics have launched their new Caracal imprint for younger readers with Quantum Mechanics, an all-alien themed graphic novel written and illustrated by Jeff Weigel. “On a nowhere asteroid on the far rim of the galaxy, two young alien girls-Rox and Zam-spend their days tearing apart and repairing clunkers in a spaceship junkyard. These aspiring gearheads yearn for the chance to test their skills on something besides rusted old rockets and broken-down planet-hoppers. Their big chance finally comes when the captain of a mysterious ship called the Quasar Torrent enlists the kids for some repair work. But what initially looks like a golden opportunity quickly becomes a nightmare when the young friends find they’ve been kidnapped by what turns out to be a band of space pirates! Rox and Zam find themselves swept up in the astro-bucaneers’ vendetta against a huge intergalactic corporation that’s forced this motley band of working stiffs from across space into a life of crime. Now the girls must chose: Do they want the comforts of home and family, or the glamorous adventure of a lifetime-to be part of a crew of colorful misfits intent on plunder, revenge, and excitement? Their lives, friendship . . . and maybe even the fate of a galaxy . . . hangs in the balance!” Comicosity has an in-depth review. 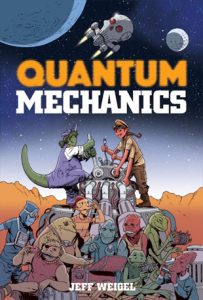