Some years ago we told you about comic creator Mike Norton and his series Battlepug — a web comic so popular it was making its way to print media. Well now thanks to Image Comics we have the complete series put together in Battlepug: The Compugdium. (We don’t make this stuff up, folks.) “At long last, Mike Norton’s award-winning fantasy/humor web comic is collected in one volume! Join the last Kinmundian and his faithful steed, The Battlepug, as they travel the globe seeking revenge against every giant ridiculous animal they can find. Featuring extras like sketches and art by some of the most creative artists in the business today! Collects the entire 5-volume original series of Battlepug!” It’s coming to stores later this month in hardcover. 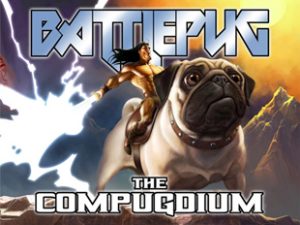