And speaking of Mike Norton (which we were a couple days ago), he’s back as illustrator and collaborating once again with Rafer Roberts on Grumble, a new full-color comic series from Albatross Funnybooks. “When the forces of good and evil are hunting you down, the only logical thing to do is disguise yourself as a dog and go on the run! Eddie is a low-rent hustler who got magically turned into a pug during a con gone wrong. Tala is the part-demon daughter of one of Eddie’s many ex-girlfriends. When Tala finds herself the target of powerful inter-dimensional forces, she goes to Eddie for help–setting off a chain reaction of chaos and destruction that could threaten the very fabric of existence. Can Eddie and Tala put aside their differences long enough to survive the magical mayhem and madness that they started, or will they kill each other first? (It’s probably the second one!)” CBR has a preview with sample pages too. 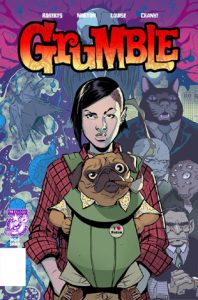