HOW It All Started with a Mouse

Seems like we just can’t get enough of Mickey Mouse’s 90th birthday celebration — and here’s a whole bunch of it at once! Walt Disney’s Mickey Mouse: The Complete History is a very thick compendium book from Taschen, edited by David Gerstein, J.B. Kaufman, and Daniel Kothenschulte. “On November 18, 1928, the world’s most famous mouse made his very first public debut. Today, we celebrate 90 years of Mickey in one of the most expansive illustrated publications on the Disney universe. Starting with the first sketches of a character who was almost named Mortimer, we trace the career of Walt Disney’s and Ub Iwerk’s most famous creation, one met with an explosion of worldwide popularity preceded only by the earlier successes of Charlie Chaplin. With unlimited access to Disney’s vast historical collections as well as public and private collections, the authors bring Mickey’s success story to life: concept art, story sketches, background paintings, and animation drawings as well as historical photographs trace the origins and evolution of such timeless favorites as Steamboat Willie, The Band Concert, and Brave Little Tailor. They also follow Mickey as he builds on this legendary library of short cartoons by appearing in two historic feature-length films, Fantasia and Fun and Fancy Free.” All that and much, much more. It’s available now in hardcover. 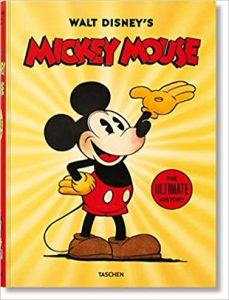