The World of the False Dawn

Also at Further Confusion we learned about Shard, a fantasy role-playing game with a considerably anthropomorphic bent. The creators, Shard Studios out of Austin, Texas, we running several games to introduce new players to the system. Here’s what they have to say on their home page for the game: “Shard Studios invites you to enter the fantastic world of Dardunah, the vast shard of a shattered realm, as presented in the colorful pages of the Shard RPG! Many years in the making, this system allows players to choose from a wide variety of animal people who are the main cast of the many adventures this otherworldly setting offers. Skyships glide through shimmering clouds past majestic crystal peaks. Giant insects prowl alien jungles or lurk in the sparkling emerald seas. Warriors with blades of diamond and amber duel across crimson sands. And mystics chant in shadowy chambers as their spirits wander abroad.” There are several books of game play and background available now. 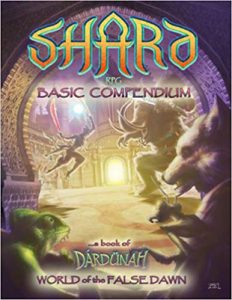