The World in Black and White?

A very… unusual anime feature is heading to our shores this spring. “Los Angeles-based Eleven Arts Anime Studio has set April 12 as the theatrical release date for the sci-fi coming-of-age animated feature, Penguin Highway, which it will be distributing in the U.S. and Canada. Directed by Hiroyasu Ishida, the film won the Axis: The Satoshi Kon Award for Excellence in Animation award at the Fantasia International Film Festival for best animated feature and has also been nominated for the Japan Academy Prize for Animation of the Year. The film will screen with the original Japanese dialogue with subtitles as well as the English dub. In the film, budding genius Aoyama is only in the 4th grade, but already lives his life like a scientist. When penguins start appearing in his sleepy suburb hundreds of miles from the sea, Aoyama vows to solve the mystery. When he finds the source of the penguins is a woman from his dentist’s office, they team up for an unforgettable summer adventure!” Got that? Read the article at Animation World Network for more, including the trailer. 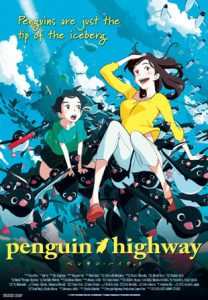