Evidently this has been a thing for a while, but somehow we missed it. Now, thanks to Oni Press, it’s all together in one place. “Brahm Revel’s critically-acclaimed series is collected for the first time in one volume in the Guerillas: Omnibus Edition! Private John Francis Clayton is on his first tour of duty in Vietnam, facing death at every turn in the middle of a war he doesn’t understand. Clayton is just trying to stay alive when he encounters an elite platoon of…. simian soldiers?!? This squad of chain-smoking chimps is the most dangerous fighting force in the jungle… but whose side are they on?” Find out when this hits the shelves in late March. 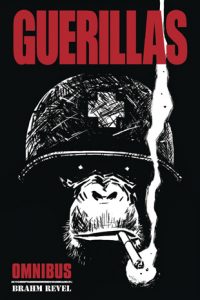