Yes that trope gets used a lot, but anyway… Word has slipped out that Hasbro is hard at work on a sequel to the 2017 animated film My Little Pony: The Movie. According to the Idea Wiki, the plot goes like this: “A giant whirlwind sends Onyx Star, Adonis, the weasels, Nike, Discord and the ostriches to outer space and they need to get back home to Equestria. Along the way, they meet new friends who were also stuck in space years ago, space animals, and evil alien ponies who wanted to capture Onyx and his friends and destroy the Earth with a reliquary-cannon after Groff, Maxil, Zio and their minions sold all of their souls for it.” Got all that? They go on to say: “The film is produced by Allspark Pictures and DHX Media, with animation created once again using Toon Boom Harmony, and is scheduled to be released theatrically on October 2, 2020 in the United States by Lionsgate. It also marks the 10th Anniversary of My Little Pony: Friendship is Magic.” Series favorite Jayson Thiessen is directing again. 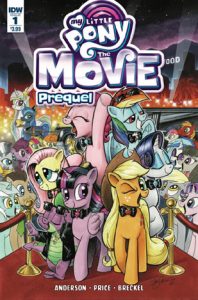