Look, we’re just going to quote this direct from the folks over at Cartoonbrew — no way we could explain it any better. “Four new animated series based on Marvel characters are in the works at Hulu. The shows will collectively lead up to a special event bringing them all together titled The Offenders. All of these projects will target mature audiences. Jordan Blum (American Dad!) and comedian/actor Patton Oswalt are writing M.O.D.O.K., about an evil mastermind with limited body mass and big plans. Hit Monkey, with Josh Gordon and Will Speck as writers, follows a Japanese snow monkey transformed into a vengeful assassin in Tokyo’s criminal underworld. Set in Los Angeles, Tigra & Dazzler Show follows a pair of ‘woke’ female heroes pushing to stand out in a city full talented people. Comedian Chelsea Handler and Erica Rivinoja (Cloudy with a Chance of Meatballs 2) have been tasked with writing the project. Lastly, there is Howard the Duck, centered on the publisher’s notorious anthropomorphic bird trapped in the human world. Director Kevin Smith (Clerks) and Dave Willis (creator, Aqua Teen Hunger Force) are writing this dark comedy and will also executive produce. Comic writer Jeph Loeb (also a producer on Smallville and Lost) will act as executive producer on all four projects, as well as the crossover finale. No writers have been announced yet for the crossover finale, in which all of these characters will ‘form a team no one asked for’ to save the world.” Got all that? No word yet on a release date for these shows, but we’ll be watching! 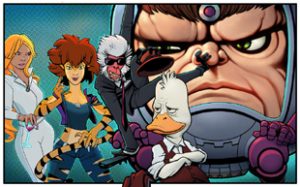