See Him Again, If You Dare

Congratulations are of course in order for the creators of Spiderman: Into the Spiderverse, following their Oscar win for Best Animated Feature of 2018. Now comes the word that one of the directors of that film is moving on to a project that’s got even more furry content — and he’s been there before. “Spider-Man: Into the Spider-Verse co-director Bob Persichetti has been signed to direct the sequel for DreamWorks Animation’s Puss in Boots, according to a report by Deadline… Animation veteran Persichetti, who has worked in various roles in the industry in a career spanning more than two decades, served as the Head of Story and voiced a role in the original Puss in Boots. The follow-up to the 2011 hit film that garnered an Oscar nomination and grossed more than $550 million globally, Puss In Boots 2 is currently in development, with a release date yet to be announced… A spinoff of the studio’s blockbuster Shrek franchise, Puss in Boots received an Oscar nomination for Best Animated Feature in 2012. Voiced by Antonio Banderas, the character, which first appeared in Shrek 2, was included in subsequent Shrek sequels and shorts.” We’ll keep our ears pointed. 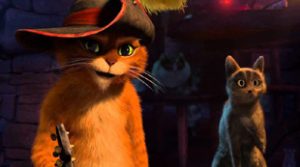