Shaggy (and the) Dog

Here we go again! We got this from Complex.com: “Scooby-Doo will make its return to the big screen with an animated movie set to star Gina Rodriguez, Tracy Morgan, and Will Forte, according to the Hollywood Reporter. The film — directed by Tony Cervone, the producer behind the television series, Scooby-Doo! Mystery Incorporated — is currently untitled. Forte is set to play the titular dane’s best friend Shaggy, Rodriguez will voice Velma, and Morgan will be non-Mystery Gang member Captain Caveman [!]. Frank Welker, who’s worked with the franchise since 1972-73’s The New Scooby-Doo Movies, will play the role of Scooby-Doo. For this case, the gang will reportedly team up with other Hanna-Barbera universe heroes to save the world from the corrupt plans of Dick Dastardly, the main villain of fellow Hanna-Barbera classic, Wacky Races [!!]. The project, which is set to hit theaters May 2020, will be the first time Scooby Doo takes the silver screen since the 2004 live-action film, Scooby-Doo 2: Monsters Unleashed.” Sounds like they’re getting much more ambitious with their universe now! We found other talk on-line about this this movie project that gave it the title of S.C.O.O.B. Guess we’ll find out next year! 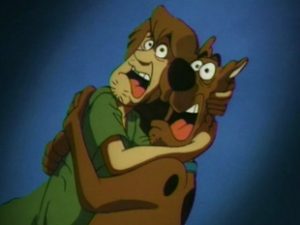