The Girl, the Monster, and pickles

Another new project we found out about thanks to Animation World Network: “Jessy and Nessy is a 40 x 11’ mixed-media preschool series about Jessy, an innately curious little girl and her best friend, Nessy, a five-and-a-half-thousand year old sea monster, with a penchant for pickles… At the heart of the show is Jessy; an inquisitive, fun loving, spectacle wearing six-year-old, who happens to see the world a little differently through her magical glasses, or as Jessy calls them — her ‘Inspectacles’. They allow Jessy to see and talk to all types of animated characters, including Nessy, who lives in a fountain in Cara Park opposite Jessy’s apartment building. Together this unlikely duo explore life’s curiosities like why birds fly south, why things don’t fall up instead of down and even why some people snore? Jessy and Nessy reveal how all these seemingly everyday curiosities have fantastical answers — leading the home viewer to explore their own curiosities and to find the extraordinary in the ordinary.” Look for the new show later this year on Amazon Prime Video. 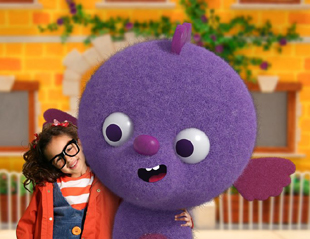