Witch’s Cat, Off On His Own

Something we recently discovered: The Freelance Familiars series of fantasy novels by Daniel Potter. Here, check out this summary of the first book, Off Leash: “When Thomas Khatt awakens to the magical world following the sudden, violent death of his elderly Archmagus neighbor, he doesn’t get the standard package of awesome power combined with a hero destiny. Nope, he trades his thumbs in for a tail, tawny fur and four feet with a very low co-efficient of friction on linoleum. His destiny as one of three talking mountain lions in the magical world? To be sold at auction and bonded to some pimply faced apprentice for life. Thomas would rather eat dirty kitty litter. Armed only with an impressive set of chompers and buckets of snark, Thomas faces off against a lightning-bolt throwing granny and a sexy union recruiter as he desperately tries hold the threads of his old life together. To stay off the leash he’ll have to take advantage of the chaos caused by the Archmagus’ death and help the local Inquisition solve his murder. A pyromanic squirrel, religious werewolves, and cat-hating cops all add to the chaos as Thomas attempts to become the first Freelance Familiar.” Mr. Potter has already finished two more books in the series, Marking Territory and High Steaks, with a fourth on the way, Rudy and the Warren Warriors. Want more? He also has a separate fantasy series about air pirates fighting dragons. Yes. Needless to say, you should visit his web site! 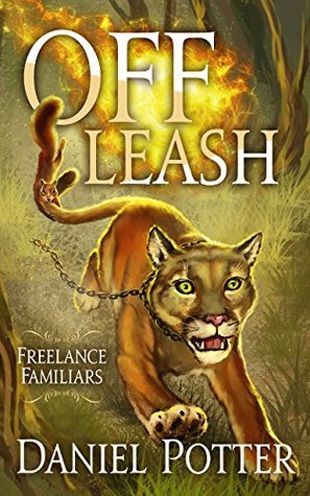