We got this direct from Animation World Network: “Hoho Entertainment has announced they have joined forces with JLI to co-develop and co-produce a brand-new animated preschool series based on the Latin heritage brand Juana la Iguana. In the new series, Juana becomes mentor and guide to youngsters Amazonas and Miguel. She leads them on exciting adventures as they discover the magic and wonder of Estrella Island. Juana shows the kids that kindness and compassion are the problem-solving tools needed to overcome any difficulty.  Heritage brand Juana la Iguana has been a favorite in Latin America for over 20 years. The original Spanish-language character show was created by Tania Gilinski, along with partners Amanda Quijano and Anita Katz – the three Latin American mothers wanted to create a program for children that incorporated both culture and values. The Juana the Iguana series began as three home videos, one of which was second only to The Lion King in sales in Venezuela. It was then picked up by national TV and became a smash hit in home and neighboring Latin America territories.” No word yet on North American distribution for this new series, but we assume the producers would love that. 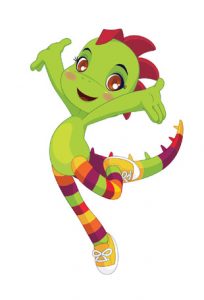