Not So Funny When It Happens To You?

Okay, here’s what we know: It seems Marvel Comics had a pair of classic funny animal characters called Ziggy Pig and Silly Seal. Now they’ve been brought back to life in a… considerably different situation as part of Marvel’s recent slew of one-shot comics. “Once they were superstars of the Funny Animal Comedy circuit! Now money and fame have ruined their friendship. Will it ruin their lives?” Find out in the Ziggy Pig Silly Seal Comics one-shot, written by Frank Tieri (Wolverine, Space Punisher) and and illustrated by Jacob Chabot (Marvel Super Hero Adventures). Marvel has a preview video, interviewing the creators. 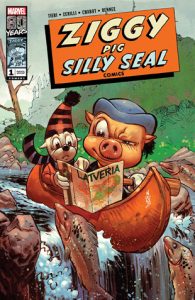