Your Childhood Is Not Safe…

Seriously, are we the last ones to know about this…? If so we’re embarrassed. Following the latest… trend (?), Hollywood is making a big budget, live action adaptation of Hanna-Barbera’s 60’s and 70’s icons The Banana Splits… as a horror movie. No, we are not joking or insane. Check out this from MovieWeb.com: “The upcoming horror thriller centers on a boy named Harley who attends a taping of The Banana Splits TV show with his brother Austin, mother Beth, and father, Mitch. It was supposed to be business as usual for the producer of the series, Rebecca, and a fun-filled birthday for young Harley. But things take an unexpected turn… and fittingly the body count quickly rises. Will Harley and company survive? And if so, what will be left of them?” It seems that a review copy of the film is already making the rounds — and the MPAA have given it an R rating for “horror violence and gore”. Honestly, what can we even say…? (Does it surprise anyone that the Syfy Channel has a hand in this?) 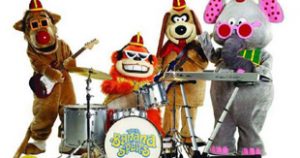