The Ponies Carry On

Whoa there! This flew beneath our radar… so it’s time to catch up! As of course you’ve heard (herd?), My Little Pony: Friendship Is Magic will be leaving us after this season. (Sniff…) But do not lose hope! It looks like Equestria shall live on… in the pages of IDW comics anyhow.  And they’ve been doing a good job of it so far! Now they’ve decided to celebrate the 75th issue of their flagship series My Little Pony: Friendship Is Magic with a special double-sized issue — celebrating the return of original MLP comic writer Katie Cook to the family. “My Little Pony celebrates 75 issues of friendship and fun with this double-sized adventure! When a chance purchase leads to a legendary quest for a missing constellation, the ponies reach for the stars and find themselves in the path of their most galactic villain yet… the chaotic Cosmos!” Illustrated by fan favorites Andy Price and Heather Breckel, it’s on the shelves now. And hey, while you’re at it, make sure to look for My Little Pony: To Where and Back Again, written by Justin Eisinger and illustrated by various artists. It’s part of a new series of trade paperback graphic novels from IDW, illustrating favorite episodes of the TV series — in this case, the popular finale of Season Six. 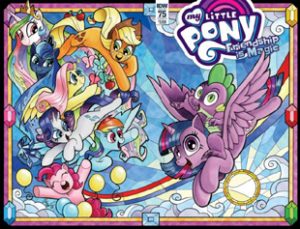