Word has been going around that the Ursa Major Award-nominated video game Cuphead (developed by Studio MDHR) is now being turned into an animated TV series. We got this from Animation World Network: “Netflix has joined forces with King Features on The Cuphead Show!, a new kids series based on the Studio MDHR video game. The show will expand upon the characters and world of Cuphead, with an animation style inspired by the classic Fleischer cartoons from the 1930s… The character-driven comedy follows the unique misadventures of the impulsive Cuphead and his cautious but easily swayed brother Mugman. Through their many misadventures across their surreal home of the Inkwell Isles, they’ve always got one another’s backs. The series will be produced by Netflix Animation and is executive produced by Emmy and Annie Award-winning producer, Dave Wasson (Mickey Mouse Shorts), with Cosmo Segurson (Rocko’s Modern Life: Static Cling) serving as co-executive producer.” That’s some good talent behind the project! No word on a planned release date yet. 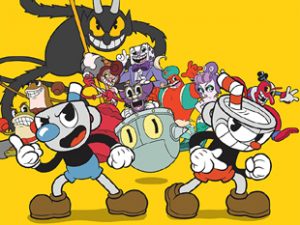