Another announcement we found at Animation World Network: “GKIDS, producer and distributor of animation for adult and family audiences, has acquired the North American distribution rights for the animated feature Marona’s Fantastic Tale, by film from director Anca Damian… The film features Marona, a mixed-breed Labrador, who after an accident reflects on her past homes and experiences. Journeying back through her memories she reflects on the deep impressions she has made on her owners’ lives. With Marona’s unfailing love and empathy she had provided lightness and innocence to her families. Marona’s Fantastic Tale is a beautiful and emotional story of an average dog and her extraordinary life.” The picture below doesn’t really do justice to how weird and artistically adventurous this 2D film is. Check out the trailer instead! 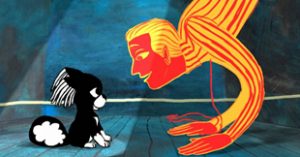