Non-human adventures on a far-0ff planet. Sounds right up our alley. Glint is a new full-color graphic novel series for middle readers, written by Samuel Sattin and illustrated by Ian McGinty (Adventure Time). “On tiny Mora ― hurtling through space trying to find a star bright enough to sustain its fading life―everyone must do their part to keep the planet alive. Workers work. Leaders lead. Fighters fight. But Loon Ozoa, confined to the life of a pit worker but born with the heart and passion of a warrior, dreams of enlisting in the Temple of Sacred Defense and fighting the monstrous Feeders that threaten his people’s existence. When his friend Val Mol, second in command of the Rightful Blade, promises Loon a place in his ranks, Loon hopes to finally serve a higher purpose. But his hoverhog-riding, glint-slinging, mine-master grandma and her motley crew―the Cloud Raiders―are none too pleased about Loon trading in his drill rig for a shift sword. Determined to serve Mora, Val and Loon’s place in the military soon gets them lurched right into the murky waters of a conspiracy, one that holds dark secrets at the hands of their supreme regent. Will Val and Loon remain loyal to their commander, or will the secrets they uncover change everything they thought they knew about the purpose of their fight and fate of their planet?” The Hollywood Reporter actually did a write-up on this one. Glint Book One: The Cloud Raiders came out earlier this year from Lion Forge, and more volumes are on the way.

[Side note: We at InFurNation would like to extend our thoughts, prayers, and a good share of tears to the staff of Kyoto Animation — those who lost their lives and those who did not. Bright Blessings in this time of tragedy.] 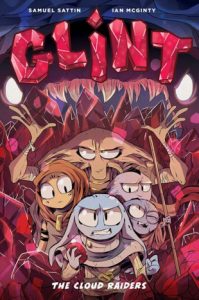