Boom! Studios recently collected two different comic book series of furry note (both of which we’ve talked about before!) into trade paperbacks. Ruinworld: Eye For An Eye brings together issues 1 through 5 of this funny animal fantasy series by Derek Laufman. “Join Pogo and Rex as they set out on a quest to hunt for valuable artifacts and magical weapons across the land. Along with plenty of not-always faithful companions, our heroes must battle dangerous tribes of Toadies, survive giant stone Golems, and stop a catastrophic world-ending disaster, all while evading a cunning gang of thieves as they race towards the biggest treasure of all time.” And then there’s Midas, a truly strange 8-issue science fiction series by Ryan North, Braden Lamb, and Shelli Paroline. “Space captain Joey, navigator Fatima, and scientist (and dinosaur) Cooper are headed to Earth—a planet completely sectioned off, abandoned, and covered in gold—and are confronted by the most powerful weapon in the universe: Some ancient dead guy’s body?! Now they gotta keep King Midas’s body from being dropped on planets across the universe, and figure out exactly what to do with a gross dead dude with one truly ridiculous superpower.” Yes, and a talking dinosaur too. Both collections are available now. 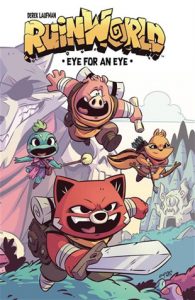