You Knew It All Along, Didn’t You?

Tell us: Do you trust your housecat? Well along comes another book series looking to make you look askance perhaps. How can you miss a title like Klawde: Evil Alien Warlord Cat? Well that’s the new series of science fiction novels by Johnny Marciano and Emily Chenoweth (featuring art by Robb Mommaerts). It starts like this: “Klawde had everything. Sharp claws. Fine fur. And, being the High Commander of the planet Lyttyrboks, an entire world of warlike cats at his command. But when he is stripped of his feline throne, he is sentenced to the worst possible punishment: exile to a small planet in a quiet corner of the universe… named Earth… Raj had everything. A cool apartment in Brooklyn. Three friends who lived in his building. And pizza and comics within walking distance. But when his mom gets a job in Elba, Oregon, and he is forced to move, all of that changes. It’s now the beginning of summer, he has no friends, and because of his mother’s urgings, he has joined a nature camp. It’s only when his doorbell rings and he meets a furball of a cat that Raj begins to think maybe his luck is turning around… ” Three books in the series are available now from Penguin Random House. Fft Fft! 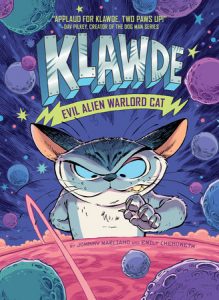