The things that people will come up with to write… You have to wonder about that when you see a book series called Two Dogs In A Trench Coat. It’s written by Julie Falatko and illustrated by Colin Jack. “Sassy and Waldo are good dogs. They spend the day keeping their house safe. Has a squirrel ever gotten inside? No! But every day their boy, Stewart, comes home from this terrible place called school smelling like anxiety and looseleaf paper. Sassy and Waldo decide to save Stewart. But they don’t let dogs into school. So Sassy and Waldo decide to get creative. They put on an old trench coat, and now everyone at Bea Arthur Elementary thinks they are a new student named Salty from Liver, Ohio. Well, everyone except Stewart.” The first book in the series, appropriately called Two Dogs In A Trench Coat Go To School, is available now in softcover from Scholastic. Two more volumes are out already as well. Woof! 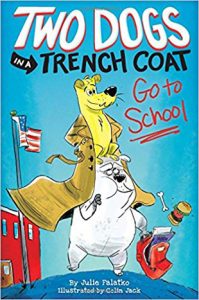