Something rather different — and even though it came out earlier this year, it’s timely for the season too! Rocko’s Modern Afterlife is a new 4-issue comic miniseries from Boom! Studios. “Something is turning the good people of O-Town into mindless zombies and Rocko wants nothing to do with it. He barricades himself and Spunky in their home and is determined to outlast the hoards outside. But desperate times calls for desperate measures when Rocko’s best friend Heffer becomes infected, Rocko will have to risk it all to save his friends and his city.” It’s written by Anthony Burch (Borderlands 2) and illustrated by Mattia Di Meo (Ben 10: For Science!), and it’s on the shelves now. Beware! 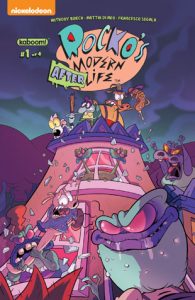