The Little Ones That Are

How in the world did we miss this one? Lion Forge has a new full-color graphic novel, the first volume of The Underfoot entitled The Mighty Deep. “It has been untold years since the Giants-That-Were disappeared, leaving behind the animals forever changed by their strange science. Now, granted the gifts of intelligence and self-awareness, the valiant Hamster Aquatic Mercenaries struggle to keep their horde alive in the dangerous new world. In The Underfoot: The Mighty Deep, H.A.M. has been hired to save their badger allies from dangerous flooding, but first they’ll need new recruits. Only the best of the best can join the ranks of H.A.M., and the colony’s most ambitious young hamster pups compete for their chance at glory and prestige. Those who succeed, however, soon discover that life outside their burrow is not the grand adventure they imagined, but instead find a world of deadly threats and conflicting stories about their species’ origins.” The Mighty Deep was written by Ben Fisher and Emily S. Whitten and illustrated by Michelle Nguyen. 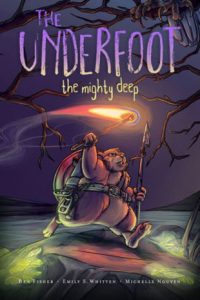