It’s always nice to see a Kickstarter campaign that works — especially when the result is something anthropomorphic. That’s what writers Bob Frantz and Kevin Cuffe and artist Walt Ostlie managed with Metalshark Bro, a new full-color comic series from Scout Comics. “What the Fin is a Metalshark Bro? Well, here’s the liner notes summary: a traditional shark stumbles upon Satan’s nephew and is forcibly given anthropomorphic qualities. With his newfound human physique and propensity for violence, he’s tasked with collecting the souls of those that have sworn allegiance to Satan. The only problem? He just wants to be a normal shark again! Naturally, he swears bloody vengeance and, uh, a whole lot of death ensues!” Be forewarned — and check it out over at Previews. 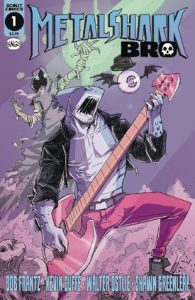