Would You? Could You?

Some things you just don’t expect… and some things, you don’t know what to make of when you find out about them. This could be both. From Animation World Network: “Netflix has just announced that their new series, Green Eggs and Ham, from Warner Bros. Animation, will debut November 8. Adapted from the classic Dr. Seuss children’s book, the 13-episode series stars Adam Devine, Michael Douglas, Ilana Glazer, Diane Keaton, Keegan-Michael Key, Eddie Izzard, Jeffrey Wright, Jillian Bell, John Turturro, Tracy Morgan, and Daveed Diggs.” Amazing cast. Okay, check try to follow along: “The story of Green Eggs and Ham is like a postmodern Planes, Trains and Automobiles through the whimsical world of Dr. Seuss. Sam rescues the rare Chickeraffe from the Glurfsburg Zoo, hides it in a briefcase, and attempts to make his way to Meepville where he can charter a cold air balloon to take the Chickeraffe to his island home. Guy just flopped his last big chance at being a world-famous inventor for the industrial Snerz Co. He packs up his invention in a briefcase and resigns to give up on his dreams and become a paint watcher. A chance meeting at a diner with Sam, and a switch up with the briefcases results in these two unlikely souls getting mixed up on an adventure that takes them on a journey of self-discovery.” You heard it here. And there. And soon everywhere. 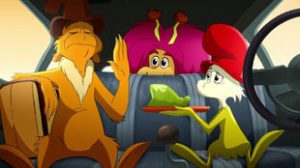