Kids and Beasts Got Each Other’s Backs

Happy Halloween! Be safe, and watch the sugar. Recently we came across Beastlands, a new independent fantasy comic book series written by Curtis Clow and illustrated by Jo Mi-Gyeong. “Beastlands is an action adventure story set in a beautiful medieval fantasy world, where some people have companion beasts known as ‘Keepers’. In Beastlands you’ll go on an adventure with a group of 3 teenage friends, Mac, Ava and Ping. They’re on a journey to find out what Mac’s father, an explorer, was trying to discover before he disappeared. On this quest their friendships will be put to the test all while a tyrannical King looks to outlaw Keepers from the land.” The comic got quite a lot of chatter going when its Kickstarter campaign topped its original goal in just a matter of days. Check out the interview and preview video over at Comic Burst. 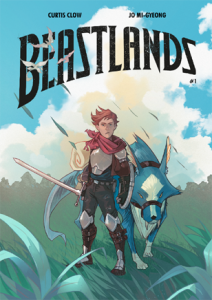