Any Port in a Storm…

Another successful Kickstarter project we discovered at a recent comic convention: Franklin and Ghost, a full-color graphic novel series written by Garrett Gunn and illustrated by Nic Touris. Check out the glowing review over at Outright Geekery. And now comes news from the publisher, Source Point Press, that a Franklin and Ghost animated series is in development. So what’s it all about? “‘Franklin and Ghost is a sci-fi adventure story about two trouble-making aliens who escape slavery on their home planet by stealing a space ship and crashing it on Earth,’ says Source Point Press Editor-In-Chief Travis McIntire. ‘They inhabit the closest bodies to the crash site, one being a fox and the other a skull from a cemetery. It’s absolute chaos from there, as they cause all sorts of trouble, landing them on the radar of galactic police forces.'” Got that? 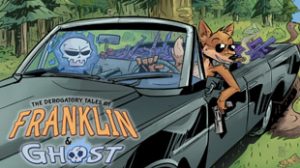