The Same Thing He Does Every Night…

Here’s one from last year we somehow missed, but we’re glad we found it now: Atomic Frenchie, a full-color graphic novel series. “When Kirby, a French Bulldog with a serious Napoleon Complex, moves to a new home in the quaint New England town of Strasburg, Massachusetts, and stumbles upon a forgotten secret laboratory, he realizes that his dreams of Planetary Conquest are finally within paw’s reach. But, suddenly, Kirby realizes he isn’t alone. Seemingly out of nowhere, a strange group of people appear, exhibiting what Kirby can only describe as superpowers! Kirby must rise up against all who stand in his way to emerge victorious in this ultimate quest for world domination.” We’re up to Volume 2 by now, written by Tom Sniegoski and illustrated by Tom McWeeney. (Look, we don’t make these things up…) Both volumes are available now in hardcover from Insight Comics. 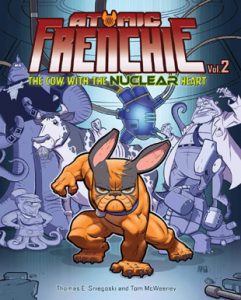