Presented annually by the Hollywood Chapter of ASIFA (the International Animated Film Society), the Annie Awards are considered by many to the the Oscars of animation — and often enough, a vital clue as to who is likely in the running for Academy Awards from this year. Recently, the nominees for the Annie Awards of 2019 were announced. Surprising no one, Disney dominated in several categories, most especially in Best Feature Film. Frozen 2 and Toy Story 4 were both on that list, along with Missing Link, How To Train Your Dragon: The Hidden World, and Klaus. Missing Link did surprise many, matching Frozen 2 at 8 overall nominations each. Over in the TV categories, notable furry nominees included Bojack Horseman, Disney Mickey Mouse, Rise of the Teenage Mutant Ninja Turtles, and a pleasant surprise: Tuca & Bertie in several categories. Visit the official Annie Awards web site to find out more. The Awards will be presented at a ceremony live from UCLA on January 25th, 2020. 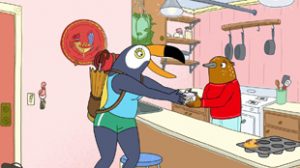