And Yes, He Eats Hot Dogs

Since his appearance in the multiple-award-winning film Spider Man: Into the Spiderverse, Spider Ham (aka Peter Porker) has been gaining in popularity again. Now you can get a big heapin’ helping of the web-pig a new trade paperback from Marvel — Peter Porker, The Spectacular Spider Ham: The Complete Collection Volume 1. “Go whole hog with the Spectacular Spider-Ham’s animal antics! What started as a porcine parody one-shot soon became a hilarious ongoing series full of anthropomorphized adventurers! Peter Porker is a photographer for J. Jonah Jackal’s Daily Beagle — but when danger strikes, he fights crime alongside hirsute heroes such as Hulk Bunny, Captain Americat and the Fantastic Fur! Can Spider-Ham triumph over fearsome foes like Ducktor Doom, Bull-Frog, the King-Pig and the Bee-yonder — while keeping the young Beagle Brigadiers out of trouble and still managing to bring home the bacon? Plus: Thrr, Dog of Thunder stars in “Tails of Arfgard”! Here comes Deerdevil, Mammal Without Fear! Nick Furry, Agent of S.H.E.E.P.! Goose Rider! The invincible Iron Mouse! Croak and Badger! The astonishing Ant-Ant! And more zoological puns!” You heard ’em here. Check it out over at Comixology. [And of course, we wish you a Merry Christmas!] 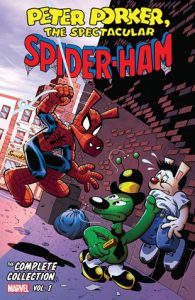