Quest of Bat and Lizard

Hey, remember that game we talked about called Yooka-Laylee? Well recently D.M. Cumbo and the folks at Dreamprism Press completed a successful Kickstarter campaign for Yooka-Layle and the Kracklestone, a new hardcover full-color graphic novel. “The story sees Yooka and Laylee plunged into a brand new secret tome world in a race against the evil Capital B to reach the legendary ‘Kracklestone’, an ancient artifact fabled to grant its holder invincibility. To reach the treasure, they’ll run, swim, trip, tumble, and fly through nine distinct, character-filled landscapes. They will encounter friends, foes, and some in-between… including plenty of fan favorites from the game!” The Kickstarter page is still up, and it features lots of art and background materials. 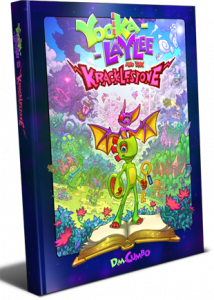